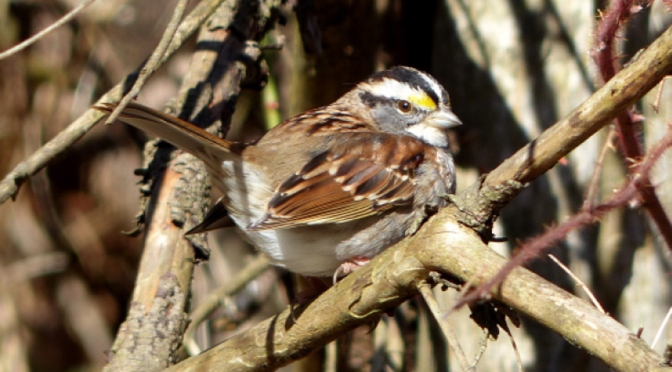 When one begins researching any topic in Ornithology (or any other science for that matter), one never knows where it is going to lead. Take, for instance, the White-throated Sparrow. All birders are familiar with this common winter visitor. Did you know, however, who first described the species? According to James D. Rising in his Guide to the Identification and Natural History of the Sparrows of the United States and Canada, that would have been George Edwards. Edwards published a book titled Gleanings of Natural History. His sparrow specimen had come from Pennsylvania, most probably Philadelphia.
Johann Friedrich Gmelin in turn used Edwards’ description as the basis for naming the species (Fringilla albicollis back then) in the 13th edition of Systema Naturae (1789). This was the publication begun by Carl Linnaeus. Most birders have heard of Linnaeus.
However, how many of you know anything about Johann Friedrich Gmelin? To be honest, there isn’t all that much information to be found on the man. And yet, Gmelin was the first to describe many North American birds, including Black-throated Blue Warbler, Wood Thrush, Vesper Sparrow, and Purple Finch.
Although described as a naturalist, botanist, and entomologist, Gmelin probably spent the majority of his time inside, examining specimens that were sent to him in an effort to name and categorize them. He originally studied medicine (not unusual for naturalist of the day) under his father at the University of Tubingen in Germany, becoming a professor there of medicine, chemistry, botany, and minerology. (Definitely a multi-tasker!) His most important accomplishment however, was the publication of the 13th edition of Linnaeus’ Systema Naturae.
But what of the White-throated Sparrow itself? This is one species that is relatively easy to identify. The white throat patch is a dead giveaway. Birds may also have a yellow mark between the eye and the bill. This is more vivid in breeding adults, as are the stripes on the head. Here, however, is where things get interesting.
Like Screech Owls, White-throated Sparrows have two morphs. (They are polymorphic.) While you can tell the two owl morphs apart by their body feather color (gray and red), White-throated Sparrows may be divided based on the color of their stripes. In one morph, the stripes on the head are black and white. In the other, they are more like brown and tan. Unlike Screech Owls who breed red to red and gray to gray, White-throated Sparrows tend to seek out mates from opposite morphs. So, a bird with black and white stripes will usually mate with a bird that has brown and tan stripes.
Opposites attract right? No, it’s not that simple. James K. Lowther published his research into this phenomena in 1962. He found that the white-striped males were more aggressive toward singers of both morphs, usually driving them off in the process. Since white-striped morphs sing and the tan-striped ones do not, this meant that the latter were not driven off and could be courted by the white-striped males. The same thing worked for the white-striped females who sang. They were able to take up with tan striped males who didn’t try to drive them away. Ah Nature! Everything is so simple
Speaking of singing, how would you describe the song of a White-throated Sparrow? It has been compared to “Ohh- h swee-e-et Canada, Canada, Canada, Canada”. Birders in New England seem to prefer “Poor Peabody, Sam, Peabody, Peabody, Peabody”. Does anyone know who Sam Peabody was? The Internet appears to be mum on this subject.
Of course, White-throated Sparrows do not nest in Carroll County (or anywhere in Maryland for that matter.) They prefer the cooler climes from the upper Great Lakes and New England up into much of forested Canada. They favor edge habitats that may border stands of large coniferous trees. Dense lowland and upland thickets are also utilized.
Most, but not all birds migrate. Some stay on their breeding range throughout the year. Migrating males arrive a week or two before the females in April or May. At this time, birds go through a partial molt. Only head and body feathers are involved, however, that is enough to be sure the white-striped morph looks its best. Males frequently return to their previously held territories. Females do not tend to do so as much. Consequently, most pairs, while being monogamous, are only so for a season.
Regardless of what they may be described as sounding like, white and black stripe morph males start singing as part of territory establishment. There seems to be some cooperation (or, at least toleration) amongst them, since the song of one male seldom interrupts that of another. They may even sing at night. When the females arrive, singing decreases somewhat. She goes about building the nest, most often a cuplike affair placed on the ground. Occasionally, however, you may find one two to three feet up in a small tree or shrub. The cup is fashioned from coarse grasses, bark fibers, pine needles, and even rootlets. It is lined with finer grasses or hair.
Four to six eggs are laid. These are a glossy white with heavy brown spotting. The female incubates them for 11 to 14 days. During that time, she sits very tightly on the nest to the point of almost being stepped on before flushing. Once the nestlings hatch, both parents are involved in their maintenance. Food consist entirely of insects and the like. The birds that fledge in 8 to 9 days, will continue to be fed for about a month.
Nesting may continue well into July and August, although pairs generally do not attempt to raise two broods. If a pair does re-nest, they usually build a new one at least 100 feet away from the earlier site.

A second molt takes place at the end of summer, this time involving all the body feathers. Both morphs then acquire the tan-striped plumage that they will sport until the following spring.
Birds also change their diets. Ragweeds and smartweeds may now make up to 25% of what they eat. Other items on the menu include wild grapes, blueberries, dogwood and poison ivy fruits. In fact, the White-throated Sparrow has the distinction of being our most fruit-eating sparrow species.
Come September and October, most birds migrate in small flocks through the night. Females and juveniles go farthest south and may leave the breeding territory before the males. During the day, they stop to rest and feed in brushy areas with lots of cover.
White-throated Sparrows arrive here in the fall, although we never seem to manage to find any of them during the annual Fall Count. It’s just a little too early. Most of them also manage to leave again before the Spring Count. You just can’t win!
Still, while they are here, White-throated Sparrows are good company. They generally feed on the ground where they scratch with both feet. Medium cracked corn works well in attracting them to home feeding stations.
Other migrants may go as far south as Florida and west to Texas, New Mexico, Arizona, even spilling over slightly across the border into Mexico. There is also a population that winters on the West Coast.
This species has pretty much the same predators as other ground-nesters. Because it tends to breed in remote areas, however, Brown-headed Cowbirds appear to be less of a problem. As is so often the case, man may be this bird’s worst enemy. Clear-cutting removes much of its breeding habitat. The longevity record for the White-throated Sparrow is 10 years, although most are probably lucky to make it to half that.
Still, the White-throated Sparrow appears to be abundant today. It may have been even more so in earlier times, despite predation of a different sort. John James Audubon noted the following:
It is a plump bird, fattening almost to excess whilst in Louisiana, and affords delicious eating, for which purpose many are killed with blow-guns. These instruments – should you not have seen them – are prepared by the Indians, who cut the straightest canes, perforating them by forcing a hickory rod through the internal partitions which intersect this species of bamboo… With these blow-guns or pipes, several species of birds are killed in large quantities; and the Indians sometimes procure even squirrels by the means of them.