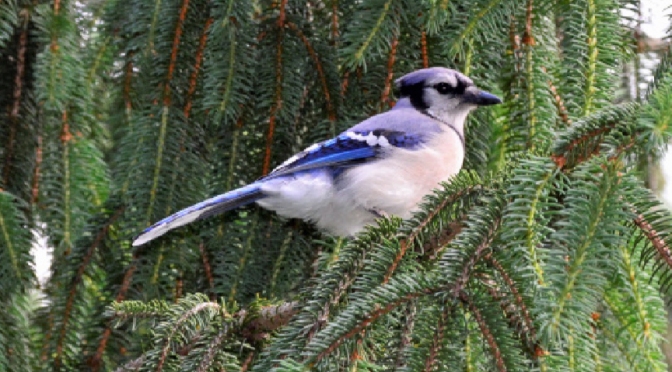 Blue Jays are a lot like some presidents. People either love them or they hate them. I’m not talking about bird club presidents of course. They are beloved by all.

So. What seems to be the problem with Blue Jays? They’re noisy. They’re bellicose. They bully other birds and monopolize feeding stations.

Nobody’s perfect I suppose. Sometimes the things birds do that may seem obnoxious to us actually have an important purpose. Take that food hoarding for instance. When Blue Jays eat, they frequently store seeds in their expandable throats. Peanuts and sunflower seeds are then later disgorged and cached.

It doesn’t matter all that much if the cached seeds become fields of sunflowers, but when it comes to oak nuts, Blue Jays can be extremely effective as reforestation agents. In fact, they may even surpass squirrels in this capacity. Early American naturalist William Bartram maintained that “these birds are capable in a year’s time, to replant all the cleared land”. Heady praise indeed, unless you are a farmer of course.

Blue Jays aren’t always noisy either. Sometimes they can be a quiet as the tomb. That’s when they are nesting.

Courtship can be loud and rambunctious though. In the spring, three to ten males may start chasing one female, bobbing up and down while uttering bell-like “toolool” and rattle calls. Gradually, the courting males drop out of the race until only one is left. These males tend to be the young bloods of the flock, the yearlings. Older Blue Jays that have bred previously appear to pair earlier, without joining in a courtship flock. And no doubt without as much noise.

Once pairing takes place, the male may feed the female. Both sexes collect the material for the nest. Mature deciduous and pine forests are preferred, however, Blue Jays have adapted to a lot of different habitats. (This, in part, explains why there are so many of them.) The construction of several preliminary nest platforms may be part of the courtship process. The final nest is constructed mainly by the female who generally secures it between 10 and 20 feet up in a tree. The bulk of the nest is made from sticks, bark, and moss, with some string and paper added here and there. She may even use a little mud to hold things together. The interior, where the eggs will be laid is then lined with finer rootlets.

Four to five eggs are laid. These are olive- or buff-colored with brown spots. Incubation by the female takes around 17 days. Once the eggs hatch, both sexes feed the young birds. Fledging takes place in about 20 days.

Blue Jays range across the eastern two-thirds of the United States and north into parts of Canada. In the north, they may only raise one brood, while two are common farther south. Once the young birds fledge, they may stay together with their parents and siblings for a month or two. During this time, the parents will continue to feed them mainly insects.

While we are on the topic of food, another plus for this species is the fact that Blue Jays are one of the few birds that really like hairy caterpillars. This includes tent caterpillars and the ones that turn into those pesky Gypsy Moths.

The Blue Jay’s annual feather molt takes place in late July or August. By then, they will have started looking a little gray around the edges. That’s because the blue is structural color and not produced by pigment. As the feathers wear, so do the shades.

In the fall, Blue Jays form large foraging flocks. As it gets colder, these become smaller. Populations in Canada and the Northern U.S may begin moving south in September and October. Interestingly, few (if any) of these migrants depart the continental U.S. Perhaps they worry that the border patrol won’t let them back in again.

Winter flocks average four to six birds, although it is not uncommon to find a lone Blue Jay here and there. The menu then is made up of seeds and fruits. They are common visitors to feeders and who knows, some of them may even manage to find the food they have been caching.

Come spring, it is back to the breeding business again. Noisy flocks made up of as many as 1000 birds head north. Blue Jays migrate in the daytime. It’s hard to miss them.

Blue Jays make a variety of sounds. Many of these are irritating. They also mimic the calls of other birds. A particular favorite in our area is the Red-shouldered Hawk. Sometimes a jay’s impression of this species is so good that birders have been fooled by it. (No one in our club, of course.) The calls of jays may also alert other birds to danger in the area. As they mob potential predators such as hawks, owls, cats, or snakes, they make so much racket that the other birds in the area can’t help but notice. And then sometimes, they just make all that racket for what seems no reason at all.