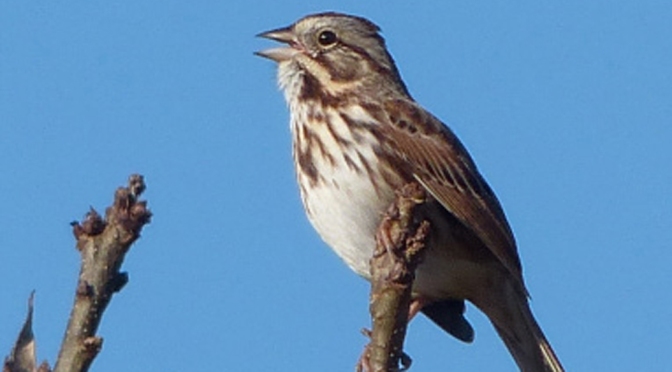 When I pulled into the parking lot at Morgan Run Environmental Area I couldn’t believe my eyes. There must have been at least fifteen vehicles there already. This had to be the best turnout ever for a field club sponsored by the Carroll County Bird Club. And I thought I was early!

Looking a little more closely at the vehicles, however, I noticed that there were no passengers sitting in any of them. Now that I thought about it, the vehicles appeared to be mostly pickup trucks. A lot of birders have four-wheel drive vehicles, but this seemed a bit unusual. Then, I noticed the many stickers showing deer antlers and the like in the back windows of the trucks. And it seemed like every one of them also had a NRA emblem as well. That explained it. These were all hunters.

Walking about a bit, I heard the occasional gun blast coming from the woods. Black powder makes a pretty loud noise. There were bird sounds as well though. I listened to Tufted Titmice, Carolina Chickadees, Blue Jays, Eastern Bluebirds, Northern Mockingbirds, and American Crows. Other birders soon arrived, including Bill Ellis, Bob Ringler, Laura and Jerry Tarbel, and Joe Hanfman from the Howard County club. That still wasn’t a bad turnout. We all agreed that none of us entertained any suicidal tendencies that morning. Not wanting to be “Deer to Someone” we decided to move on to another more suitable birding spot.

While we were deciding exactly where that spot might be, we watched some birds flitting in the nearby small trees and bushes. There was a nice variety there, including Ruby-crowned Kinglet, Golden-crowned Kinglet, and Blue-headed Vireo. Someone also heard a Purple Finch. Joe said that he had come along on the trip in hopes of locating a Lincoln’s Sparrow. There seemed to be just as good a chance of seeing one at the Union Mills Wetlands site along Brown Road, so we headed there.

The best bird of the day, however, was spotted by Joe Hanfman. Not only did he spot it, he made sure that everyone had a good look at the bird. It turned out to be a Rusty Blackbird. I have to admit, however, that my own personal favorite for that site was this one Song Sparrow that sang continuously from a perch near where I had parked my car, allowing me to take some nice photos of it.

Driving to the end of Brown Road, we continued along Halter Road, parking at the bridge there. Bill Ellis and I were quite familiar with this territory. We cover it during the three Carroll County Bird Counts each year. This is usually a good spot for Belted Kingfishers. One put in an appearance while we were there. Other species seen or heard included Song Sparrow, Red-bellied Woodpecker, Blue Jay, Red-tailed Hawk, Northern Mockingbird, White-throated Sparrow, White-breasted Nuthatch, Golden-crowned Kinglet, and Rock Pigeon.

Study Pond was next. The water there was pretty clean and no longer covered with algae as it had been on my last visit. There was quite a nice assortment of waterfowl on the surface, including Northern Pintail, Ruddy Duck, American Wigeon, Black Duck, and Coot. Not to mention the regular Canada Geese and Mallards. Other birds in the area were Eastern Bluebird, 1Turkey Vulture, Cedar Waxwing, Blue Jay, and Yellow-rumped Warbler. While searching the pond’s shore for waders, we looked up and saw a Bald Eagle flying fairly low overhead. What a treat!

Then, it was off to Hashawha. We worked our way from the pond referred to as “Lake Hashawha” up the hill past the American Chestnut plantation and down again to what used to be the beaver pond. Along the way, we heard or saw Red-bellied Woodpecker, White-breasted Nuthatch, Swamp Sparrow, Ruby-crowned Kinglet, Blue Jay, Field Sparrow, Turkey Vulture, Northern Mockingbird, American Goldfinch, Northern Cardinal, Song Sparrow, Carolina Chickadee, White-throated Sparrow, Carolina Wren, Downy Woodpecker, Northern Flicker, Eastern Towhee, Dark-eyed Junco, Red-Tailed Hawk, and Yellow-bellied Sapsucker. The latter was a nice male. Pickerelweed was still blooming on “Lake Hashawha”.

Backtracking along the steam to the large open meadow, we added some new birds to the list, but only one new species. There was Red-bellied Woodpecker, Carolina Wren, Song Sparrow, Carolina Chickadee, Turkey Vulture, Northern Cardinal, Tufted Titmouse, Yellow-rumped Warbler, Ruby-crowned Kinglet, Belted Kingfisher, and Eastern Bluebird. At some point a flock of Common Grackles flew over.

Walking back to the parking lot, we all went our separate ways. It had been a successful field trip. We never did find a Lincoln’s Sparrow, but we were able to spend some quality birding time with good friends.