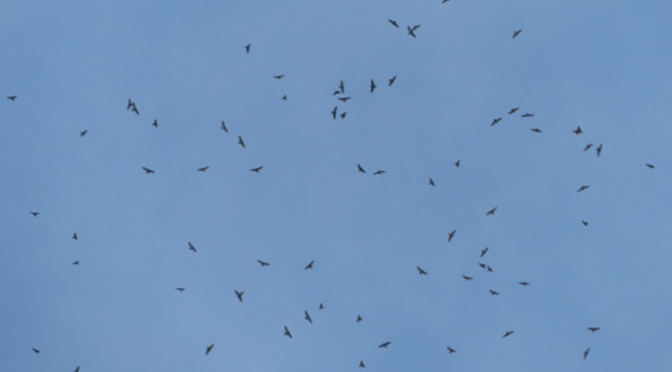 9/14/14
My wife Mary and I met Dave Harvey at the park-and-ride on Route 32 at 9:00am. He was the only member who had called to tell us he was going other than Bob Ringler. Bob planned on arriving at the park in time for the dawn chorus. He was to meet us there.

I had never been to Cromwell Valley Park before, however Mary and Dave had. It wasn’t difficult to find. As per Bob’s previous instructions, we waited to turn into the second entrance. Bob appeared as we parked the car. He had already racked up an impressive warbler list. We had to settle for a Common Yellowthroat, American Goldfinch, Red-eyed Vireo, Cedar Waxwing, and Gray Catbird seen or heard on our way up to the hawk watch area.

But, we weren’t there for the warblers now. We wanted to see hawks. And we certainly wouldn’t be disappointed.

In a later posting on MDBirding, hawkwatch organizer Jim Myers would later refer to it as “one of the most enjoyable days on record at Cromwell Valley Park”. Since I had never been hawkwatching there before, I had no point of reference. However, I could not remember a more pleasurable day of watching hawks anywhere in the past.

We joined some 40 others on the hill. Most were experienced birders, but some were beginners who had read about the place in the newspaper and decided to check it out. Hal Wierenga was leading a group from the Anne Arundel County chapter. It was nice to see him again. The weather couldn’t have been better for sitting around watching hawks.

The Broadwings were the stars of the show, of course. They would come streaming across the sky before forming up into kettles right overhead with as many as 200 birds. Official totals for the day (8:00am – 6:00pm) included the following:

Since we were only there for half a day, CCBC watchers did not see all of the individual birds mentioned in Jim’s final report. We did see a lot of hawks, however, belonging to all the species except for the Merlin. The flocks of chimney swifts passing over were also impressive.