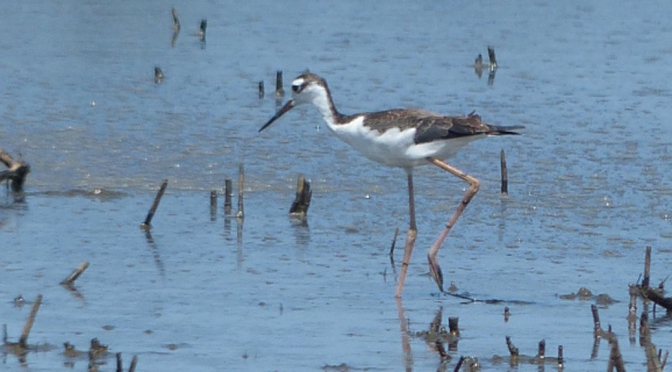 The Carroll County Bird Club made a rare mid-week foray to Bombay Hook. It had been billed as a shorebird trip and was to have taken place the week before. Unfortunately (or fortunately as it turned out) we had decided to reschedule it due to the weather. What was supposed to be rain had turned torrential and we may have even found ourselves caught up in flooding. August 19th, instead, was sunny and dry with just enough breeze to keep the mosquitoes at bay. But, I am getting ahead of myself.

First, club members actually had to get there. For some reason, that proved more difficult than it should have been. We were to meet at the Park and Ride in Eldersburg on Route 32, just south of Liberty Road. Bob Ringler, Skippy Ringler, Tom Miller, Spike Morningstar, and I met and stood talking for a while. It soon became obvious, however, that we were missing Maureen Harvey.

Dave had pulled his back, so we knew he wasn’t going to be able to make it. Bob called him at home to ask about Maureen. She had already left. The only thing we could figure was that she had gone to the other Park and Ride on Route 32. (An easy mistake to make. We often meet there.) Hopping into two cars, we raced down to the other lot. Just as we arrived, Maureen was in the process of pulling out to go look for us.

Our next stop was at a shopping center just before the Bay Bridge where we were supposed to pick up Debbie Terry. Debbie was there. As we stood discussing who was going to ride with whom, Maureen spotted an Osprey flying overhead with a large fish in its talons. We all stood there watching in wonder. How do they manage to land those big ones anyway?

Driving through parts of Maryland’s Eastern Shore and Delaware, we ended up at Prime Hook National Wildlife Refuge. Bob, who was leading, decided this would be a good first stop. We had just finished checking out the visitors center (and the restroom, of course) when Bob’s phone rang. “Where are you?” asked a voice on the other end. It was Bill Ellis. He had been staying at his place in Ocean City and decided to drive up and join us. Since the trip was supposed to be to Bombay Hook, Bill figured he would just meet us there. Bob suggested that he now drive back south to Prime Hook. We would wait for him.

While we were waiting for Bill, we did manage to do a little birding. There were quite a number of birds around the visitors center. The volunteer there was particularly excited about a large congregation of egrets in a tree within view. She took us outside to point them out to us. From what we could tell, they were all Great Egrets. Purple Martins, Tree Swallows, and Barn Swallows soared back and forth over the fields bordering the road. Higher still sailed Bald Eagle, Turkey Vulture, and Red-tailed Hawk. Other species in the fields and trees themselves included Eastern Wood-Pewee, Northern Mockingbird, American Goldfinch, Chipping Sparrow, Mourning Dove, and Carolina Wren.

Once we had everyone on board, we set off on Prime Hook Road, eventually making our way through much of the wetlands. Tom had brought along some walkie talkies, so the occupants of all three vehicles could stay in touch. Pulling off from time to time in order to set up scopes, our list soon included Snowy Egret, Great Blue Heron, Caspian Tern, Forster’s Tern, Double-crested Cormorant, Laughing Gull, Semi-palmated Plover, Lesser Yellowlegs, Short-billed Dowitcher, Black Skimmer, Semi-palmated Sandpiper, Greater Yellowlegs, Herring Gull, Great Egret, Osprey, Least Tern, Black-bellied Plover, and Black-necked Stilt.

Unfortunately, the road was closed well ahead of the beach. Still, that didn’t keep us from piling out and walking as far as we could. Through the scopes, we were able to see some ponds on the leeward side of the dunes. We were able to add Sanderling, Ruddy Turnstone, and Red-breasted Merganser. There were two of the latter. They sat very still facing us and were pretty much impossible to identify until a man crossing the dunes forced the birds to get up and walk a short distance.

Clapper Rails called from the marsh nearby. I saw one fly briefly. It quickly disappeared into the marsh again though. We had only a slightly longer view of a dark, thick-billed sparrow. Debbie spotted it. Before we could say for sure what it was, however, it too disappeared. Fortunately, I had managed to take a few photos. While none of these were great, they did enable us to confirm Debbie’s tentative ID of the bird as a Seaside Sparrow.

The weather was really nice. It was sunny, with enough breeze to keep the mosquitoes down. We also saw very few biting flies. Leaving Prime Hook, we drove north to Port Mahon. There were some Willets here and quite a few Royal Terns as well. These were new species for the trip. Forster’s Terns were also numerous. Many of these were immature and it was nice to get a good look at their brownish plumage. We also saw Lesser Yellowlegs, Semi-palmated Plovers, and Great Black-backed Gulls here.

For the most part, the road was good, however, there were a couple spots where the macadam had washed out and the sand was pretty deep. We were all in four-wheel (or all-wheel) drive vehicles, however, not everyone visiting the area that day was. Club members came to the rescue of a woman whose vehicle was stuck in the sand. While we were pushing that car out, the driver of another attempted to pass by. She got stuck too. No problem for the CCBC though. Most of us didn’t even have to remove our binoculars to effect a rescue!

With that bit of exercise out of the way, we once again resumed our journey to Bombay Hook. Considering that this was billed as a field trip to Bombay Hook, it was only fitting that we get there sooner or later. On the way, we noted Red-tailed Hawk, Horned Lark, Bank Swallow, Tree Swallow, Barn Swallow, and Blue Grosbeak.

When we finally did make it to Bombay Hook, we were in for a bit of a disappointment. The large numbers of shorebirds we had hoped to see were nowhere to be found. As we drove around the various impoundments, we made the best of it though and managed to turn up Snowy Egret, Double-crested Cormorant, Royal Tern, Gray Catbird, Eastern Towhee, Common Yellowthroat, Blue Grosbeak, and Northern Harrier. Notice that there aren’t any shorebirds on that list.

The sightings sheet at the visitors center (Or was it posted online somewhere?) mentioned a Sedge Wren that had been hanging out around the Allie House. None of us could remember ever having been to this historic dwelling before. When we finally found it, there were some interesting birds hanging about. These included Indigo Bunting, Eastern Kingbird, and American Goldfinch. Bob thought he heard a Bobolink fly over. No one heard a Sedge Wren though.

After waiting for a while longer (just in case) we all packed into the vehicles headed for the exit. We had only gone a couple hundred feet when Bob told us to stop. Sure enough, he had heard the Sedge Wren. We took up position along the road. Each of us stared at his or her favorite patch of marsh grass. No wren. Then, it would call again and we would refocus on where the sound came from. Still no bird. In fact, we never did actually see it. But, it was well worth the effort. Standing there together, listening to its delightful song was a highpoint of the day.

On the way to the gate, we actually did see some shorebirds. There were Semipalmated Plovers and Semipalmated Sandpipers. Added to these was a Green Heron, a female Wood Duck, and a Marsh Wren. The latter, like its cousin, was seen but not heard. Quite a few monarch butterflies passed by as we left.